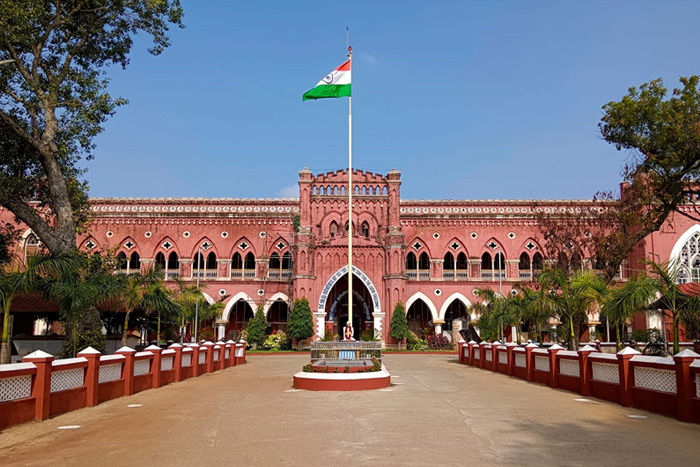 H.H. The Rajah’s College, which was first established in the year 1857, as Maharajah’s Free English Medium School, has now attained the supreme state of being an esteemed institution with real potential and the state of eminence and excellence. This school, under the first headmastership of one BT Assistant nomination was started by the Kingdom of Thondaman in 1879. The Free English Medium School started functioning in the year 1879 in a spare building at Vadakku (North) Raja Street in Pudukkottai. The first batch of the final year students of this school were sent for the terminal exam. to the Madras University in the year 1880. Because of this 1880 is being considered as the beginning year of this College. H.H. The Rajah’s College celebrated its centaury year celebration in the year 1982. Likewise the 125th year was celebrated in the year 2006.

In the year 1891, the high school classes and the college classes were transferred to this present building. The Head Master of the Maharajah Free English Medium School Mr. S. Narayanaswamy Ayyar B.A.,

was appointed as the first Principal of this College. During the tenure of Mr. S. T. Ramachandra Sasthiri, as the Principal (1912 – 1920) courses like History, Chemistry, Mathematics, Accountancy, Tamil and Sanskrit were taught to the students. In the year 1920, after the introduction of the science subjects in the Madras University at PUC Level, this college attained the state of self sufficiency to some extent.

In the year 1921, a Boy’s Hostel was built at the southern side of the College Play Ground. In order to provide the Vocational Training (Technical Skills) to the students, Motor Rewinding course was offered in the year 1928. Later this course was changed into Two Years Technical Course for producing the Engineering Graduates.

In the Year 1946, the Welfare Committee of the Madras University granted permission to this college to start the UG Courses. Then the subjects like Economics, History, and Mathematics were taught at the UG Level. The College started functioning as the first UG Degree College, affiliated to Madras University, in the year June 1946.

B.A. English was first started in the year 1980. Subsequently M.A. History and M.Sc. Mathematics were introduced in the year 1981 and 1982 then is the year 1984, B.Com degree course was offered in the Evening College Stream. In the Mean time our H.H. The Rajah’s College was affiliated to the Bharathidasan University Trichirappalli in 1982.

Now, there are about 3000 students studying in our college compared to the meager strength of 16 students in PUC of this college in the bygone academic year 1881.

A sum of Rupees Two Lakhs was spent for building the compound wall around the college playground. From the academic year 1989-1990, M.Phil. Course was offered in Both M.Com and M.A. (History) Degree Courses. Because of this the college attained another glorious mile stone in its pursuit of growth and development. M.A. Economics and B.Sc. Physical Education courses were started between the year 1990 and 1991. Ph.D. Full Time course was introduced in the department of History between 1992 and 1993. B.Sc. Computer Science was offered in the year 1996. H.H.The Rajah’s College was declared as an Autonomous College by the University Grants Commission in the academic year 1999-2000. The College which was awarded the 3 Star Status by the National Assessment and Accreditation Council (NAAC) between 1999 and 2000, was then declared as the ‘B’ Grade College by NAAC between 2005 and 2006.

Thus our prestigious The H.H.The Rajah’s College (Autonomous), after being ratified and ranked by the UGC, New Delhi, in the year 2011, was given the extension offer of Autonomy.